The world of music in the operating room. 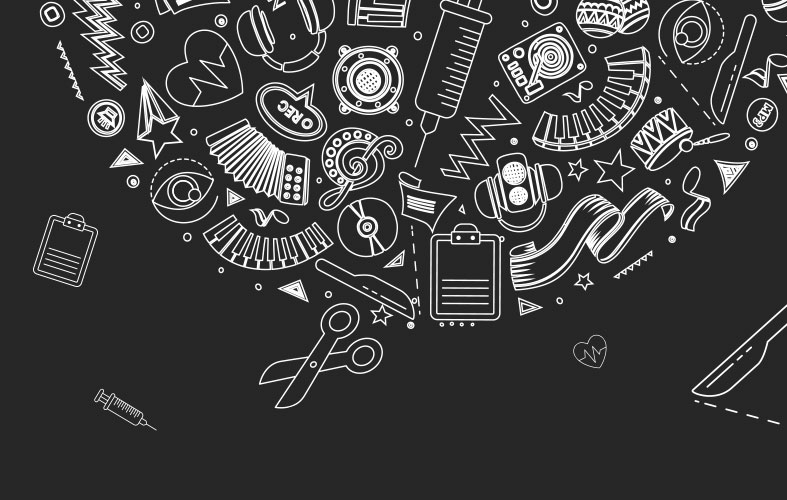 Could you imagine watching classics like “Dirty Dancing” or “Rocky” without any soundtracks? Perhaps you are finding that even just reading the names of those movies instantly brings a song to mind.

Music adds depths and makes movie scenes come to live by creating a link between the images and our emotions. However, hearing sounds akin to music at other times is also by no means unusual. That is, some of us might find ourselves hearing a high-pitch sound coming ever closer when reading a piece of writing describing increasingly tense action. Or hear a violin play when watching large flocks of birds fly by, or drum rolls just before giving a presentation. Hence, music often both reflects and can have a deep impact on our emotional states.

Which brings us to the question of what might happen if, for example, the background music we hear isn’t quite right? In order to find out, Rachel Beattie, from the University of South California, divided 37 students into two groups in 2011. Both of the groups were first asked to read and understand a text without being exposed to any noise. Both of the groups completed this task with the same positive results. When one of the groups was exposed to music while performing the same task again, its performance dropped significantly. This series of tests showed that music can significantly impact on our performance. Other studies have shown that aggressive rhythms with frequent changes can negatively impact on our ability to concentrate.

If music has such an effect on us, surely the next important step is to find out how we can use it to maximum benefit.

The fact that playing the right tunes in a commercial setting is likely to increase sales has also long been common knowledge. We also tend to experience a lift in mood when we listen to our favourite song. When music is composed in the right way, the right rhythm can also have a positive effect on our performance. In 2012, scientists from the Max Planck Institute in Leipzig, Germany, demonstrated that our favourite music makes us work harder. The blood test results of the study participants showed that those who had been listening to their favourite music while working out worked harder, breathed in more oxygen and used less energy. As much as ten years earlier, researchers were already able to demonstrate that music increases on-the-job productivity when researcher David Hargreaves exposed 72 employees of a British bank to different kinds of music over a period of three weeks. These studies have furthermore shown that it is rhythm that is the decisive factor for increasing productivity, in particular when i omes to monotonous work and night shifts.

How can we benefit from these findings in the healthcare sector? Does performing surgery while listening to fast-paced music make surgeons more precise, faster or more relaxed? Do we attend to patients with more empathy when there is no interfering background music?

Researchers have been debating these issues for more than 100 years. An operating room is a place where several different professions meet. The work they perform demands a high level of concentration and everybody involved works towards a common goal, and yet each of the individuals inhabiting these professional roles is unique and will have their own music preferences. As researchers working with Sharon-Marie Weldon from Imperial College London described in the “Journal of Advanced Nursing”, nearly 50 to 70 percent of all surgery worldwide is now being performed with music playing in the background. In order to avoid musical pitfalls and to create a harmonious atmosphere, it is always advisable to change composers, pitch and kind of music from time to time and agree genres in advance.

Nearly 50 to 70 percent of all surgery worldwide is now being performed with music playing in the background.

Music that draws on sounds from nature such as the rolling sounds of waves, or the sound of rain falling on a piece of wood or glass, helps people to concentrate and creates a relaxed atmosphere that enhances performance. Classical music is also known to increase concentration. The subjectively perceived value of ones own work can also be enhanced by listening to epic and dramatic music. The US-American surgeon Evan Kane wrote about the positive effects of phonographs in the operating room as early as a 100 years ago. However, it is obviously key that such music must not interfere with the operating room personnel’s ability to easily communicate with one another. This is why some clinics fundamentally question whether to tolerate the use of music in ORs. Music can be a distraction in particular during the most difficult moments or hours of a surgical procedure, or conversely, make a team work faster and increase its ability to concentrate. If music has the effect of increasing a surgical team’s motivation, it is more likely to perform the surgery better, faster and with more energy.

Finnish researchers have found out that listening to their favourite music helps heart attack patients’ recovery.

Another matter to take into consideration is the patient’s role in all of this.

The Finnish research team working with Teppo Sarkomo from the University of Helsinki found that, of the 60 heart attack patients studied, those that listened to their favourite music for two months made the fastest progress.

Music with repetitive patterns that listeners like a lot can have a calming effect on patients and, by triggering the production of messenger substances, divert their attention from their pain. Following an evaluation of 72 studies and scientific papers mapping the experience of nearly 7,000 patients, British scientists identified that suitable music can ease pain and make patients calmer – and that is before, during and after surgery. Even Aristotle recognised the healing effect of music, which is why it has been widely used to alleviate physical and psychological suffering for the past two millennia. There are now a number of studies that confirm the benefits of playing music in operating rooms for both patients and surgeons.

These findings suggest that immersing oneself in the world of music during surgery is recommendable for surgical teams and patients alike. When doing so, it is important to take account of surgeons, nursing staff and patients’ musical preferences. Agreements to that effect could include listening to a specific genre, followed by a piece from another composer and another genre, while maintaining the same volume throughout. However, patients should also be asked whether they actually want to listen to music from a compliance point of view. Unable to resist the opportunity, we have compiled our own tongue-in-cheek L&R OR playlist on Spotify which we created specifically for your OR.

Patients should also be asked whether they actually want to listen to music from a compliance point of view.

My day with supports and orthoses.

Our L&R Academy trainers provide training to customers, business partners and L&R staff around the world – from Tehran to St. Petersburg.